The first ever food truck to hit the streets of (Greater) Cleveland was Dim and Den Sum, run by chef Chris Hodge. That name seem familiar? That would be because his second food truck is none other than the Hodge Podge Truck of The Great Food Truck Race of Food Network fame. Dim and Den Sum launched in may 2010 and was an instant success, paving the road for some of the other trucks I’ve already reviewed.

And as mentioned before, my wife’s work does a great job recruiting food trucks, and so we managed to catch Dim and Den Sum right before they shut down for the cruel Cleveland Winter.

Dim and Den Sum offers an eclectic menu of interesting choices with an Asian twist that usually is announced ahead of time online, on Twitter and on Facebook. My wife chose pork pot stickers that were so tasty, they were gone before I had a chance to take a picture. However, they were also a bit steeply priced. I, on the other hand, settled on the PBLT sandwich: 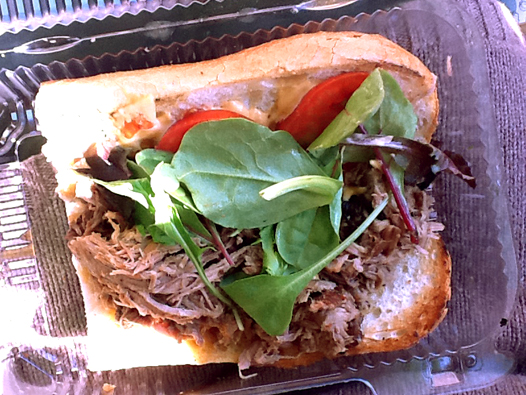 Pulled pork, bacon (missing in this photo, sorry!), lettuce and tomato with a Sriracha aioli that had a pleasant kick. (Though my wife points out that that’s spinach, not lettuce…) The sandwich was huge, and in those bites where all flavor components came together it was delicious. Unfortunately the pulled pork was heaped on so generously that you had to separate the halves of bread, and only one side had the aioli, so the other side came off a bit bland.

The food was great, and would have deserved a pretty high rating, but unfortunately I witnessed a rather unfriendly rebuff to a customer ahead of me in line, and bad service has always been a pet peeve of mine. The other people manning the truck were very friendly though.

Bottom line? Well, it’s the original Cleveland food truck, don’t miss it! Great Dim with really interesting Sum, but due to the service issue mentioned above I’ll rate the experience a 3.75/5. Nevertheless, I’ll definitely give it another try come Spring!