Chengdu in Sichuan Province is filled with panda memorabilia. Why? Because the Giant Panda Breeding Center, an effort to prevent the dying out of this species, is located there and draws millions of Chinese and foreign tourists. Of course we had to go and squeal over panda babies, lazy pandas, pandas in heat (which sound remarkably like goats…) and more.

What we didn’t quite expect was the Center’s restaurants offerings to “eat like a giant panda”. But of course I had to try! 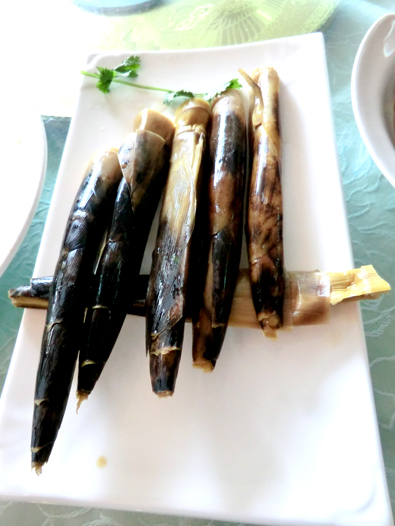 So, while bamboo shoots, though boiled, not raw. I had no idea they turned black! We had to peel the outermost, harder layers (just like pandas do) to get to the soft, really tasty inner tube of flesh. 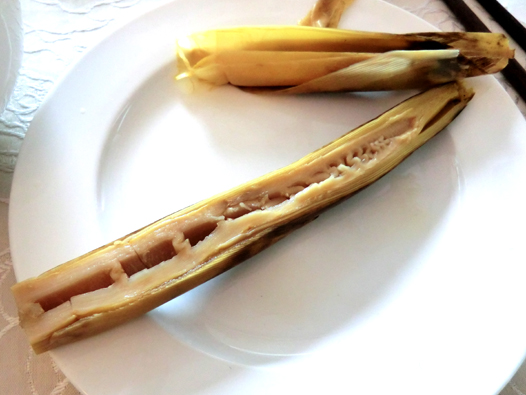 Buttery soft!
Now, pandas literally spend 95% of their waking hours eating. That’s because they can only digest 20% of the bamboo, and have to pass the rest. Panda droppings are *very* fibrous and green. As a gentle warning, humans don’t appear to be too much better at digesting bamboo shoots…

And to finish up, I ordered something by pointing at the picture on the menu (no English was spoken by the staff). I’d expected mushrooms, but got algae. This didn’t bother me one bit, I love pretty much anything that grows/lives in the sea, however, this was one true-to-Sichuan-hot-as-all-hell dish. 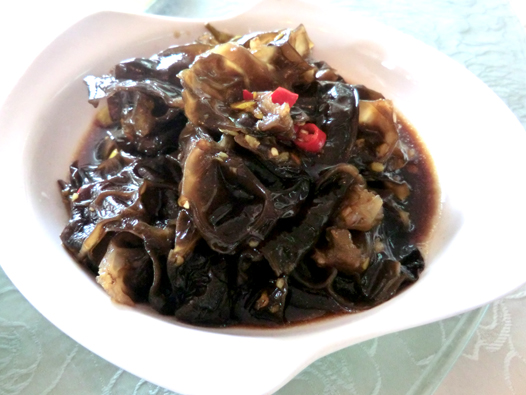 Lots, and lots, and more Sichuan peppers reduced me to a glazed-eyed, flaming red, perspiring, somewhat insanely grinning mess uttering high pitched giggles and “whoa”s, but I couldn’t stop eating, it was so tasty. I simply can’t explain the appeal of it; it’s this strange, tingly sensation that makes you want to cry and never stop eating at the same time. Sichuan isn’t for softies!

What vegetables have you encountered you didn’t think were edible or tasty and that blew you away? Anything you’re dying to try?

Breakfast, the most important meal of the day, right? Well, Chinese breakfast is nothing like American breakfast (or European breakfast, for that matter), and comes in many forms. I’ll attempt to give a basic overview over what you may encounter, focusing on the less figure-threatening options.

One of the most common things you’ll see, though not necessarily in hotels, is congee or konji, a very thin, watery rice porridge. Don’t think oatmeal consistency, think soup: 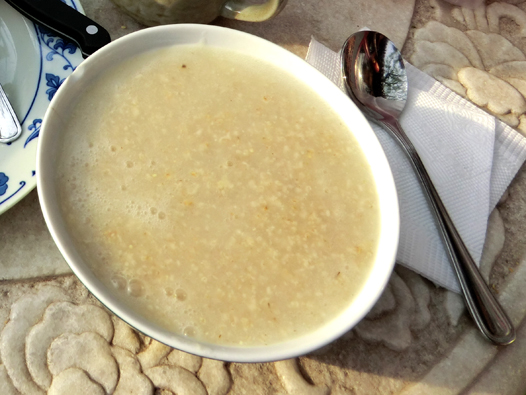 Congee itself is pretty flavorless, but what makes it delicious is the toppings that you add. Those range from fruit to fish, but the most common options will include all kinds of salty pickled vegetables (somewhat like pickled sushi ginger). This is not typically a breakfast that appeals to most Westerners, but you can get quite used to it. Due to the high water to rice ratio, the caloric count really isn’t too bad.

From here on, I’ll show pictures of various breakfasts I had on our trip. Let’s start with a breakfast I had in a little breakfast street kitchen in Wenchuan, Sichuan province:

This is a pretty typical assembly consisting of a tea egg or cha dan (a hard-boiled egg soaked in tea, soy sauce and spices), pickles, kelp soup or hai dai tang, and bao zi (stuffed steamed buns filled with either minced vegetables or meat). The bao zi clock in higher on the caloric scale with about 100kcal for a small steamed bun (fried bao zi are much, MUCH worse!), but one or two nicely beef up your breakfast. The kelp soup, consisting of long, noodle-shaped strips of seaweed in a clear broth, has about 85 calories per cup, and is especially nice on a cool morning. To enjoy this dish, you should definitely like the chewy texture of kelp.

Next, breakfasts in Chengdu, Sichuan province, at our hotel, which also served Chinese-style breakfast: 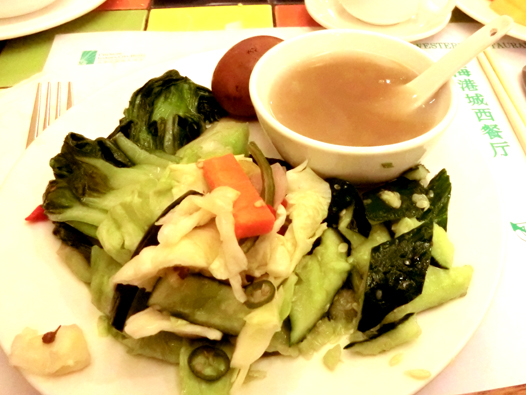 As you can see, there is broth and a tea egg again, and also some boiled baby bok choy (delicious!). There are also two cold dishes consisting of lettuce and Sichuan peppers (certainly wakes you up in the morning…), and the omnipresent wintermelon, a bitter melon shaped like a long, pockmarked cucumber that is incredibly popular in China. Very vegetable-heavy dishes, though larger buffets will have meat options and bao zi as well.

Same hotel, other morning. The same vegetable dishes, plus a small cake made of bean paste and seeds. I think this would have been better warm, but the one I got was pretty much cold and very gelatinous. I didn’t finish it. 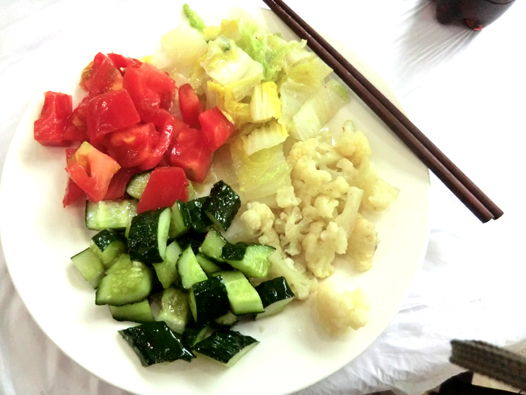 Our hotel in Emeishan taught us that Chinese businessmen at breakfast are basically hyenas. I kid you not, there were war cries and head-first dives supported by copious use of elbows. To be fair, when I faught back with the same methods, I earned graciously given respect and managed to still get food on my plate before everything was gnawed down to the bone. This restaurant had very few meat options, so I loaded up on cauliflower (pretty much just steamed without flavour), pickled cucumber, pickled tomatoes and pickled napa cabbage (yes, pickles are essential for breakfast in China). 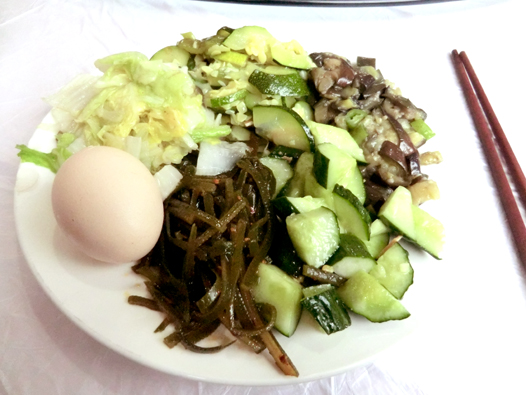 And the final breakfast also was from Emeishan: a hard-boiled egg (no tea involved), pickled cucumbers and napa cabbage, kelp strips in a Sichuan pepper marinade (cold, but it got me sweating profusely!) and a delicious, warm eggplant stir-fry with peppers that was less rabidly spicy.

And there you have it – I also just ate fruit from stalls or street carts on mornings where we didn’t get breakfast or there were no options that appealed to me, and there are also copious little carts that pop up around breakfast times that will serve bao zi and similar items in steamer baskets.

What is your preferred breakfast? Being German, I’ve always preferred a savory, cold breakfast, but how do you respond to that? And as always, if there is anything specific you’d like to ask, shoot!

While in Chengdu, Sichuan Province, China, we decided to take the day off and just laze. We ended up seeing Pirates of The Carribean 4 in a theater in Chengdu, since we failed to find a place showing one of two commemorative movies dealing with the Sichuan earthquakes released for the 2nd anniversary of the catastrophe. Fortunately, most movie theaters in China let you choose between dubbed and subbed versions!
Regardless, we had dinner afterwards in one of the many restaurants in the mall next to our hotel. The place was called Yusty’s and consisted of a very long hall with different stations serving themed foods (seafood, sushi, desserts, noodle soups, etc.), and I ended up at the traditional vegetable dish station.

Here is what was advertised:

The dish translated roughly as “Spicy Flavor Beans” and a large pot came for 16 yuan, or $2.51. Food in China is wonderfully cheap.

What arrived looked a bit different, but was SO tasty!

Now, spicy in Sichuan means hot-as-hell on average, but this was actually very pleasant. The metal pan stayed sizzling hot and the flavors were wonderful. I loved it so much, I had to try and recreate it at home! 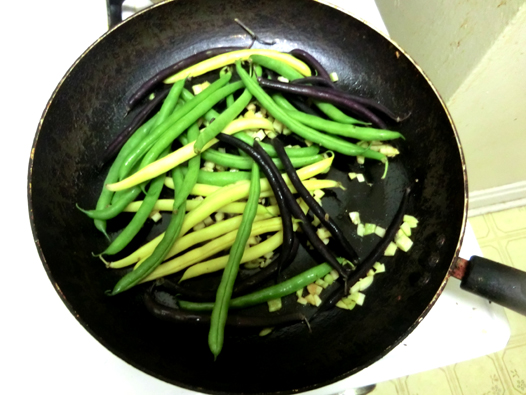 5. Add water, soy sauce and vinegar, turn heat to high and bring to a boil.
6. Lower the heat, simmer for 20 minutes stirring frequently until liquid is mostly reduced.
7. Enjoy as a side or main course! 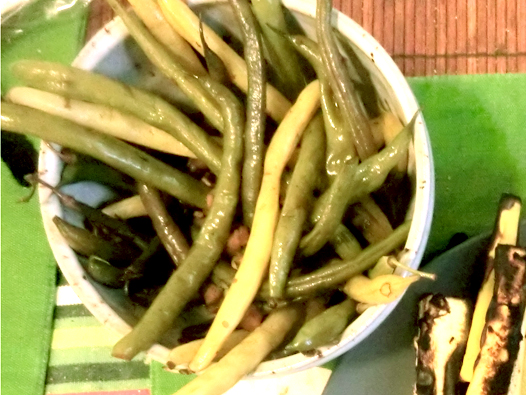 What are some dishes you’ve encountered on your travels that you just had to recreate? Where you successful?