While we were in Beijing, my friend showed us a traditional Beijing dumpling restaurant right around the corner from her work. Of course we went along happily!
The restaurant consisted of several completely separate rooms along a corridor, each of which was slightly different, but all felt kind of cozy with tons of plants, traditional clay figurines and muted lighting (sorry for the low quality pictures!). Many of the waitresses had traditional, complex braided hairdos that added to the flair of things.

We ordered a variety of dishes to share, starting with asparagus and chicken in a brown sauce that opened my eyes to the world of green asparagus. You see, in Germany we usually eat the white kind, and I had been suspicious of the green version. Now I’m a dedicated fan! 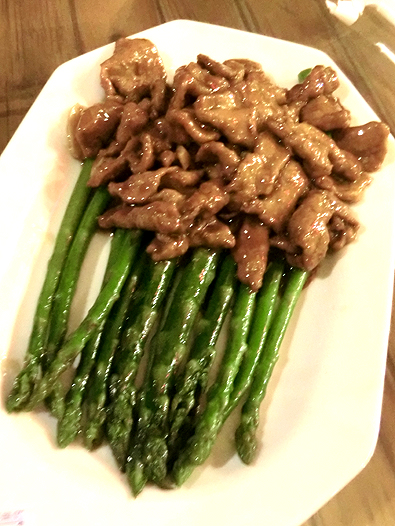 We also had a dish of baby bok choy and mushrooms that I loved so much, I tried to recreate it at home for a lunch staple, and I’ll post the recipe soon! Mildly savory and buttery soft bok choy with earthy mushrooms and ginger. Delicious!

And of course the dumplings. We each chose a filling, of which there was an entire separate menu with about 15 pages. Any meat, seafood, vegetable, sauce and combination thereof were available!
Beijing-style dumplings are boiled, not steamed or fried, and come with died wrappers (white, orange, green and purple). Unfortunately the colors don’t correspond to the fillings, and all three orders came in a colorful mixture, so that it was a take-a-bite-and-see experience. I think we each got at least one of each, and I liked them all very much. My wife had beef ones that were great, mine were a mixture of vegetables and mushrooms, and my friend had another meat-vegetable mix. 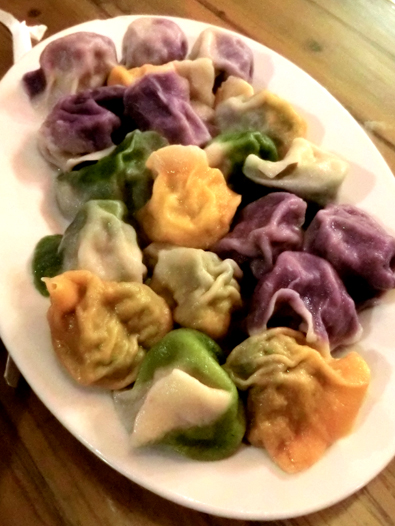 Going to a dumpling restaurant is a great, interactive meal if you have a small group of people, and all the dishes were absolutely delicious. Two thumbs up! On top, in pretty much any Chinese restaurant you’ll get a huge selection of vegetables that easily make your dinner much healthier than what you’d ever get overseas as Chinese cooking!

Do you like dumplings? What variety is your favorite kind? Have you been successful at keeping them from falling apart when making them yourself, unlike me?