When in China, most likely you’ll be on foot or on a bicycle (at your own risk!) when not in a taxi. There’ll be lots and lots of walking, and you’ll see snacks everywhere. Who could resist? Here’s a list that merely scratches the surface of the matter, but with options that are healthy and delicious and a little more exciting than simply stocking up on fresh fruit and sugar-free chewing gum (though the gum variety is worth checking out!).

One of my favorite snacks I had while walking in the streets of Chengdu, where small fry kitchens and food carts abound:

This was a sweet cake made by preparing a paste from glutinous rice meal and water and steaming it wrapped in a corn husk, similar to a tamale. The cake was moist and while it was sweet, it didn’t just coat your mouth in sugar stickiness. Wonderful! 🙂

When we were in Leshan, a city in Sichuan that hosts a 70 meter high buddha carved into a mountain covered in temples, we made the mistake of thinking of the trip as a road stop along the way and lugged our luggage up and down the mountain for 2 hours in the boiling sun. To cool down, we went for ice cream. Ice cream comes in odd varieties in China (for example corn ice cream in the shape of corn on the cob), but a traditional, locally made variety looks kind of like a white popsicle:

Unfortunately, nowhere on the wrapper does it list the flavor, and I have been racking my brain ever since what that flavor was. Mildly sweet, not at all overpowering, it was great and refreshing. The best I can come up with is a subtle resemblance to coconut, but I don’t think that was it. If anyone knows, *please* let me know! This is a wonderful snack on one of the many hot Chinese summer days for relatively few calories compared to milk- or cream-based ice cream.

Staying in Sichuan, we decided to hike up Mount Emei, one of the four sacred Buddhist mountains in China. Let me tell you, an 11 hour hike covering 14 miles, steeply uphill on stairs, not paths, to reach the summit at 10,100 feet, left me in dire need of protein to refuel. I opted for beef jerky.

Little did I suspect that even beef jerky comes in the Sichuan variety. They must have just rubbed this stuff in Sichuan pepper paste! Well, I was very alert after, and it was actually very tasty, even though my water consumption went way up afterwards. Jerky is a staple in convenience stores and snack shacks or carts in rural areas, so be on the look out for it if you need a protein kick and are tired of eggs. Not low in fat or salt, but not too bad.

And the final snack I found at a little street kitchen in the hutongs of Beijing. I *adored* this:

What you see here a paper thin meringue-like containers shaped as a triangle. The filling is your choice: 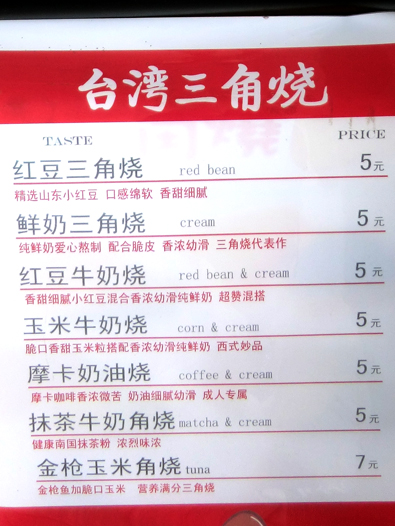 I went with red bean paste, because I love all things red bean. Not too sweet, perfectly balanced and light, this is a fairly low calorie snack with protein and sweetness! Of course, if you opt for a cream-base filling, that doesn’t hold true. And as an added bonus, they come in the most adorable little paper bag:

What are some of your favorite snacks? Do you eat snacks on a regular basis, or try to avoid them? Anything you found while traveling that you wish you could get back home?