China is full of small fruit stores, fruit stalls, and fruit carts attached to bicycles that you wave over and can peruse at your leisure, provided you don’t get hit by a car/bike/scooter/bus/angry pedestrian first while trying to get there. 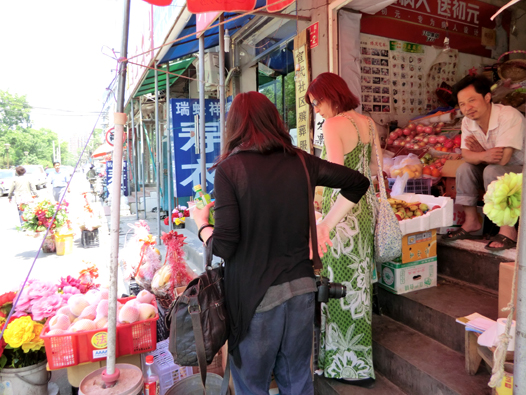 I bought two little melons and a dragonfruit on my first night in Beijing: 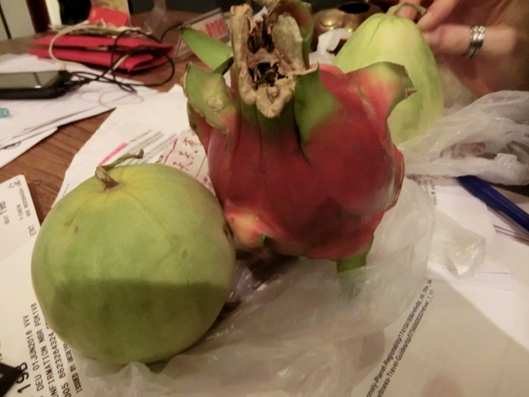 I had one of the little mystery melons like an apple for lack of utensils, since the rind was not hard like in the Western cultivars* I am used to. To be honest, I wasn’t sure it would be a melon until I ate it, even though my friend insisted the girl working in the fruit store called it melon. The melon was mostly round and about the size of a really large apple or pear. It tasted crisp and less sweet than expected, really more like an incredibly juicy apple.

The other melon was a bit larger and was easier to identify as a melon, despite being more pear-shaped. The rind was also harder and the flesh sweeter and softer:

Unfortunately they are truly mystery melons, I haven’t been able to find any more information on these online or elsewhere, so if anyone can tell me anything, please do! I’d more than appreciate it.

Update: Thanks to Gatti, we’ve been able to figure out that this appears to be a subspecies of the Chinese musk melon, also known as xianggua, which literally means fragrance melon. Thank you!

*My wife says nobody knows/uses the word “cultivar”. Do you?